By Chris Inge, McDaniel College, 2017, Member of the Football Team 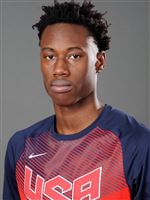 Mount Saint Joseph’s forward, Jalen Smith, is already one of the best high school basketball players in the country, but his ceiling is so much higher. He still has one more season after this year to play before entering college.

“He is a tremendous player,” said Mount Saint Joseph head coach Pat Clatchey. “But more than that, he is also a tremendous young man. He is a high character person with excellent parents and good grades. He is the total package.”

It’s practically useless to mention the colleges interested in Smith because almost everybody wants him. But Smith probably won’t make a decision on a college until at least next fall. Last season, as a sophomore, Smith averaged 12 points, seven rebounds and two blocks a game. He is now 6’9” and athletic and versatile enough to play either of the forward positions. He can muscle and post up inside, or shoot the outside jumper.  “He has endless possibilities,” said Clatchey. “Because of his athletic ability and grades, he has a lot of options and endless opportunities.”

As for now, Smith will lead the Gaels, who finished with a 33-6 record last season. According to Clatchey, Smith isn’t a “rah-rah” player, but rather, one who leads by example. “Very quiet and goes about his business,” said Clatchey of Smith, who is rated the top player in Maryland and No. 17 nationally by ESPN.

Smith has to take control because the Gaels lost five seniors from last year’s team. But he will collaborate with teammate Darryl Morsell, a 6’4” senior shooting guard who recently committed to the University of Maryland.  Morsell averaged 10.6 points, 5.1 rebounds and 1.1 assists last year. He’ll probably try to recruit Smith, also known as “Sticks,” to Maryland.

Since 2003, Clatchey has sent six players to Division I schools. “I look for fundamentals, skill, and basketball IQ,” Clatchey said of his players, “and also the intangibles of life, meaning being competitive, being tough, and being a complete player.”

“The biggest thing is that we have a lot of success as a program,” said Clatchey. “Teams are going to gear up and try to beat you. We must be at our best to have a chance to prevent that from happening. It’s amazing what can be accomplished when nobody cares who gets the credit.”