The official program lists the St. Frances point guard at 5’9”, their shooting guard, 5’11”; their opposing backcourt, 6’5” and 6’3”, respectively. The MIAA A Conference Championship is on the line. A packed house at the RAC on the UMBC campus. The stats only measure the players’ height, not their hearts! With the diminutive backcourt, St. Frances handedly defeats its opponent and is crowned the 2015-16 MIAA A Conference Champions! Just like the small school they represent these players are a prime example of their coach, mentor and leader, Nicholas Myles. All Heart. 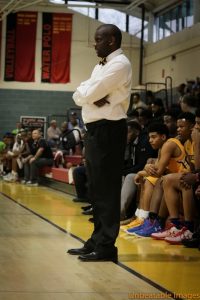 Nicholas Myles’ basketball career began at legendary Dunbar High School. After graduating in 1997, he continued his playing career at Bowie State University. His coaching career began in 2001 at the Oliver Recreational Center. He began to apply himself to his craft and after several AAU seasons and one season under Coach Mike Daniels at City College High School, Coach Myles officially become a Panther in 2006, under Hall of Fame Coach, William Wells.

For the past 10 seasons, Nicholas Myles has been the Athletic Director and Head Men’s Basketball Coach at St. Frances Academy. During his career, the men’s basketball team has not been the only team that has brought great pride and championships to the small, Catholic school in East Baltimore. In 2015-16, St. Frances made history as both the men’s and women’s basketball teams won their conference championships on the same night! Nick has brought his “we are a family” mentality to the school and it has helped build champions in all of the school’s sports.

A family is exactly what Coach Myles has helped build at St. Frances. Head Varsity Football Coach Henry Russell stated, “Nick Myles has been a totally awesome athletic director for us, he totally welcomed us and made us feel like family.” He continuously brings in kids from all over the city, state and country who flourish from the tough love that his coaches provide and that helps shape them into the kind of student-athletes that college coaches desire. In the past few years, St. Frances has produced the most student athletes, entering Division I colleges. For the past two seasons, Coach Myles and his basketball staff have produced more Division I players, than all of the public and private schools in the Baltimore area.

Under Coach Myles’ direction as Athletic Director, the athletic department of St. Francis has come to life. Just in the past week, the Lady Panthers volleyball team won the IAAM championship and both the JV and varsity football teams won their respective MIAA A Conference championships. The championship football teams were a result of the leadership of Coach Myles, as he helped orchestrate the transition of the new coaching staff. Assistant Coach Keith Kormanik said, “This process started 9 months ago back in February and the kids deserve all the credit for showing up and making the commitment. We told  them if they put the work in, they would be very happy in November. And last Saturday they were all smiling walking off field as champions.”

According to Coach Russell, this season’s championship football team will have at least 14 or 15 seniors who will go on to play Division I football. Coach Myles and his staff know that for a lot of the student athletes at St. Frances, their respective sport is a means to earn a college degree and help secure a career. Coach Myles is helping to shape the lives of these young men and women and helping to build quality young people with bright futures.