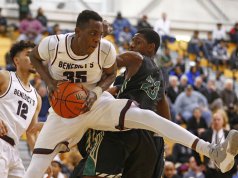 Bourama Sidibe is a 6’10” power forward who attends St. Benedict’s Prep in Newark, New Jersey.  Sidibe was born in Mali in West Africa, but has lived in Spain for most of his life.

“The transition from Spain to the USA wasn’t hard for me because I learned a lot of things before I got here. But one thing I realized is that everybody is quick and well-coached,” said Sidibe.

Sidibe is a great post presence and knows how to play the screen and roll with his players very well. Along with his nice mid-range shooting touch and his ability to score down in the post, he is poised to be a force in his conference.

Sidibe is ranked number two in New Jersey and holds offers from Arizona State University, Memphis, University of Maryland, Seton Hall University, Syracuse University and Virginia Commonwealth University, as well as interest from several other Division I programs. Sidibe is also a fantastic shot blocker. Last season, Sidibe led his team with 17 points, 11 rebounds and 5.5 blocks per game with a record of 32-5. Sidibe ‘steam lost to Findlay Prep and La Lumiere on ESPNU.

Before Sidibe came to the United States, he played on Adidas Nations and in the Fab 48 AAU tournament in Las Vegas, Nevada. Throughout his three years at St. Benedict’s, Sidibe has improved his second jump ability and his rebounding. Sidibe played on the Under Armour Association circuit this past summer for WE R1 and won the UAA Finals Championship 75-63 over Splash City. Sidibe finished the championship game with 8 points and 11 rebounds. His UAA combined stats included 9 points per game and 9 rebounds per game.

“For my school, my team should look pretty good and we have about 15 players that can play which means we have a deeper bench so we go hard every day to make sure we get better, said Sidibe .