A Legend on the Court and in the Community 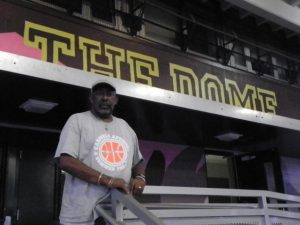 William Wells, a Waverly native, has a fantastic life story. Wells attended Dunbar Middle and High School, as well as Baltimore City Community College, Towson State Teachers College and The Maryland Institute College of Art. After playing basketball in the Baltimore area, Wells began his 28-year coaching career at St. Frances Academy, a basketball powerhouse in the Baltimore area that has ranked in Maryland’s top 25 for past 11 seasons.

At St. Frances, Wells’ players did not have access to a basketball gym, so they practiced at the Madison Recreation Center, known as “The Dome,” and played home games the University of Baltimore. Wells has a lot of success coaching at St. Francis, tying Cardinal Gibbons High School for the most wins and titles in the Baltimore Catholic League (“BCL”).

A legendary head coach, Wells leads all head coaches with 516 wins at St. Frances Academy. Wells is also the staff member with the longest tenure at St. Francis, teaching art physical education. When Wells began coaching at St. Frances in 1980, the team played in the Catholic Youth Organization for five years and joined the Baltimore Catholic League in the 1986 season. Wells’ first season at St. Francis was a period of transition and adjustment, but the second season he led St. Frances to a record of 21-0. In his 4th season (1990-1991), Wells and St. Frances earned their first BCL regular season title and tournament title. Wells was known as a good role model for the community and his players.

Wells had several promising players come through the doors of St. Frances. In fact, in Wells’ 8th season, Mark Karcher came to St Frances to play under Wells, whom Karcher knew from the Madison Recreation Center. Karcher, one of the players under Coach Wells to play professionally, is now an assistant coach at St. Frances. In 1996, his 11th season at St. Frances, Wells received an invitation for his team to participate in the Alhambra Catholic Invitational in California, which featured the top high school teams around the country. St. Frances won the tournament. In his 17th season as a head coach, with all of his recognition and accomplishments, Wells approached St. Frances administrators about a basketball gym for his team. This was accomplished in 2002.

Wells, who was inducted into the Baltimore Catholic League Hall of Fame, has received seven certificates of recognition from Baltimore County politicians. Wells is very popular around Baltimore, where he knows some of the top players who have played in the NBA, such as Carmelo Anthony and Muggsy Bogues. “Carmelo was my ball boy at St. Frances before he went to Towson Catholic,” said Wells. “They all came through The Dome. I coached the United States Youth Game for Baltimore City and this is how I knew I was good enough where I should be coaching high school basketball and I was beating actual high school coaches in the 21 cities that we played against. My team won it three times.” Wells, who was a father figure to his players, taught them a life lesson when he was coaching. “I use to take my team to Eager Street University and you know what’s on Eager Street: the jail,” said Wells. “My motto was that either you going to do it my way or its going to go to Eager Street University. They got all day to work on their game but the major thing is you want to keep kids away from that and the thing is that you want them to see that so they don’t grow up like that and that was my motto and I think that’s the way to get kids away from the streets.”

Wells himself received the best information that really changed his life early on. Wells didn’t realize he was hanging with the wrong crowd until somebody saw his potential and set him straight. One thing that Wells accomplished was establishing a summer basketball league in honor of high school standout Craig Cromwell. Cromwell was shot in Baltimore leaving a basketball summer league tryout. This will be Wells’ 34th year doing this summer league. “I started this tournament in [Cromwell’s] honor and it’s been going on ever since,” said Wells. “I even started the Midnight Madness at The Dome and when I started this event we had about 2,000 people there and the police told me what’s good about this league is that when it’s going on there is no crime in East Baltimore.” Wells has given a lot to basketball, but above all he is a father figure to the young men of Baltimore and loves his community. He hopes to one day write a book about his life.